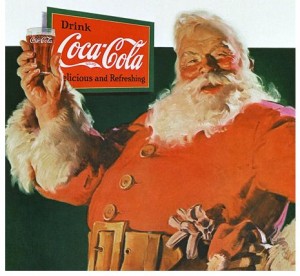 The holiday season is the time when many classic holiday ad campaigns return to television, print and radio.  Many of these Christmas ad campaigns have been around for decades, while others that have gained memorable status are new to the holiday ad market.

Some of the most memorable holiday ad campaigns belong to Coca-Cola.  However, all of the advertisements have one common theme, and that is the iconic Santa Claus used in most of their ads throughout the holiday season.  Coca-Cola began their Christmas advertising in the 1920s with print ads in magazines such as The Saturday Evening Post.  At the time, the soft drink was considered a “warm weather” drink, and the purpose of the holiday print ads began with the slogan “Thirst Knows No Season,” with drawings of Santa Claus.  In 1931, Coca-Cola commissioned illustrator Haddon Sundblom, who created a drawing of Santa based on the Clement Clark Moore poem “A Visit from St. Nick” (better known as “ ’Twas the Night Before Christmas”).  In 2006, another classic holiday ad campaign for Coca-Cola began with a group of polar bears watching the aurora borealis and drinking Coke.  Few people realize that this advertising campaign was directed at the U.S. Hispanic market.

In another classic holiday ad campaign, Anheuser-Busch featured the Budweiser Clydesdales pulling a sleigh through a snowy street and ending with the view of a wreath on the door.  The Clydesdales have been used in Budweiser advertising since they were gifted to August A. Busch Sr. by his son, August Jr. to celebrate the repeal of prohibition in 1933.

Inspired by the story, “Yes, Virginia, There Is a Santa Claus,” Macy’s began its Believe holiday ad campaign not only to keep Santa alive in the hearts and minds of children, but also to answer the hopes and dreams of children everywhere.  The “Santa’s Mailing Address” advertisement featuring Queen Latifah and a child mailing a letter to Santa, announced that for every letter to Santa a child delivered to Macy’s, the company would donate $1 to the Make-A-Wish Foundation.  The company eventually donated $1 million to the foundation, which grants the wishes of terminally ill children.

One of the simplest and most elegant holiday ad campaigns comes from Hershey, and it first appeared in the mid-1980s.  The advertisement shows red, green and silver wrapped Hershey Kisses in the shape of a Christmas tree.  The kisses act like bells, playing the song We Wish You a Merry Christmas, ending with the final bell wiping its forehead in exhaustion, and the words “Happy Holiday’s from Hershey’s Kisses.”

Although not intended as a holiday ad campaign, this classic commercial has remained popular throughout the holidays and into the new year since 1991.  The ad features a snowman walking into a home and sitting down at a table to a bowl of Campbell’s soup.  As the snowman eats the soup, the snow melts away, revealing a young boy, as the song Let it Snow plays in the background.

Another holiday ad campaign that is fairly new is the “M&M’s Meet Santa” commercial.  The M&M’s meet Santa in the living room of a home, surprising both the candies and Santa.  Santa and the red M&M both faint at the site of the other, exclaiming “They do exist!”  This Christmas ad campaign began airing in the late 1990s and has become a holiday classic.

Although the Kay Jeweler’s slogan “Every kiss begins with Kay” is used for every season, the Christmas campaign ads are the best known.  One that has become a classic is the new baby advertisement, with the mother and father celebrating their first Christmas as parents.

Using the “Island of Misfit Toys” as depicted in the holiday classic Rudolph the Red-Nosed Reindeer, Verizon takes a shot at the AT&T iPhone by including the iPhone with the misfit toys.  The toys are initially baffled as to why the iPhone is a misfit, until the map of coverage appears over the phone.  The advertisement is still relative even though the original holiday ad campaign was created when only AT&T carried iPhones.  Now the advertisement shows that Verizon has a greater network than AT&T.

Carson Williams of Mason, Ohio, set up a video camera to capture the Christmas lights on his house that had been synchronized to the song Wizards In Winter and posted the video online.  It became an instant Internet sensation, prompting Miller Lite to use the spectacle in their “Enjoy the Lites” holiday ad campaign.

Although most often associated with the jingle “The best part of waking up is Folgers in your cup,” one particular Folgers advertisement is now closely associated with the holidays.  The original holiday ad campaign debuted in 1985, and featured Peter, a college student, arriving home and awakening his parents with the smell of fresh brewed coffee.  An updated version began airing in 2009, with Peter greeted at the door by his younger sister.

These memorable holiday ad campaigns reappear every season, and many consumers say that they know it is Christmas when the ads appear.  To find out more about our online and print tools to help start your personal marketing strategy, visit /. Be sure to join our Facebook Community and follow us on Twitter for real estate marketing tips.